Other churches in Gibraltar

The only other Anglican place of worship on the Rock is the King's Chapel.

There are many other Christian churches in Gibraltar, and we maintain friendly relations with them. Here are links to some of them.

The Roman Catholic Diocese of Gibraltar has several places of worship: www.catholic.gi

Gibraltar Methodist Church is not far from us, on Main Street: methodist.org.gi 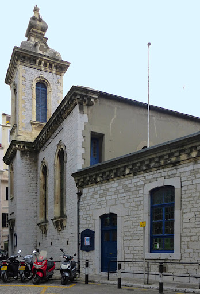 The Church of Scotland can be found a little way up the rock from us: scotskirkgibraltar.com. Their building is also the venue for New Life Church: www.newlifegib.com.

Cityline Church is also higher up the rock, on Hospital Steps. It was founded by a church in New York: www.citylinegibraltar.com

The Orthodox Church (Ecumenical Patriarchate of Constantinople) celebrates services occasionally in different venues in Gibraltar, such as our own Holy Trinity Cathedral or the Roman Catholic Cathedral: orthodoxgibraltar.blogspot.com

If we have missed anybody out, let us know!

On a worldwide scale, we are part of the Anglican Communion, with churches in 165 countries, grouped into 41 provinces. Depending on the density of churches, some provinces cover more than one country, and some countries have more than one province. See www.anglicancommunion.org.

Within that framework, we fall under the province of Canterbury in the Church of England: www.churchofengland.org.

Within the Church of England, we belong to the Diocese of Gibraltar in Europe, which serves nearly 300 congregations in over 40 countries: www.europe.anglican.org.

Within our Diocese, we are grouped with Anglican churches in Morocco, Spain, Portugal and their islands in the Archdeaconry of Gibraltar.