Many people are involved in helping the cathedral community worship, work and witness day by day: elected churchwardens, church council members, and other officials; plus volunteer choir members, servers, lesson readers, intercessors, etc. If you feel that there is a way in which you could contribute to the life of the community, do let us know.

The rest of this page profiles all who have been licensed by the Diocese in Europe to lead worship and carry out pastoral tasks here.

Pam was born in Liverpool and has spent her life around ships. On leaving school she worked for a large shipping company. After her marriage to Alan, a Merchant Navy Deck Officer, the company allowed her to go away with him and she spent ten very interesting years on tankers and gas carriers, even working for a couple of years as a stewardess. They came to live and work in Gibraltar in 1980 before the Spanish border was open, and began attending Holy Trinity Cathedral. Alan was a Marine Pilot and Pam worked for a ship owner. Both their daughters were born here and went to the UK for undergraduate and postgraduate degrees.
Pam studied with St John's Nottingham under the Diocesan training programme and became a Reader in January 2017. She is also authorised to take funerals. 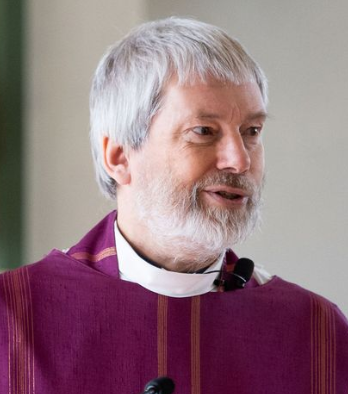 Ian arrived in Gibraltar in March 2020 and was due to be installed as the new Dean of the Cathedral in April 2020, but this ceremony was delayed to October because of the pandemic.

Ian grew up in the English county of Essex, and studied physics at Cambridge University. While studying he discerned a call to the ordained ministry of the Church of England. After a year working in Holland, and two years working in Kenya, he trained for ordination at St John's College, Nottingham. For three years he served as a curate at St Mary's, Ealing, and then went to Zaire with the Church Mission Society, where he was involved in theological education - among other things! During the liberation war, by which Zaire became the Democratic Republic of Congo, he spent six months in Uganda.

After returning from DRC, Ian served as a chaplain at the University of Nottingham for eleven years, and then as Rector of St Mary's Woodford for ten. 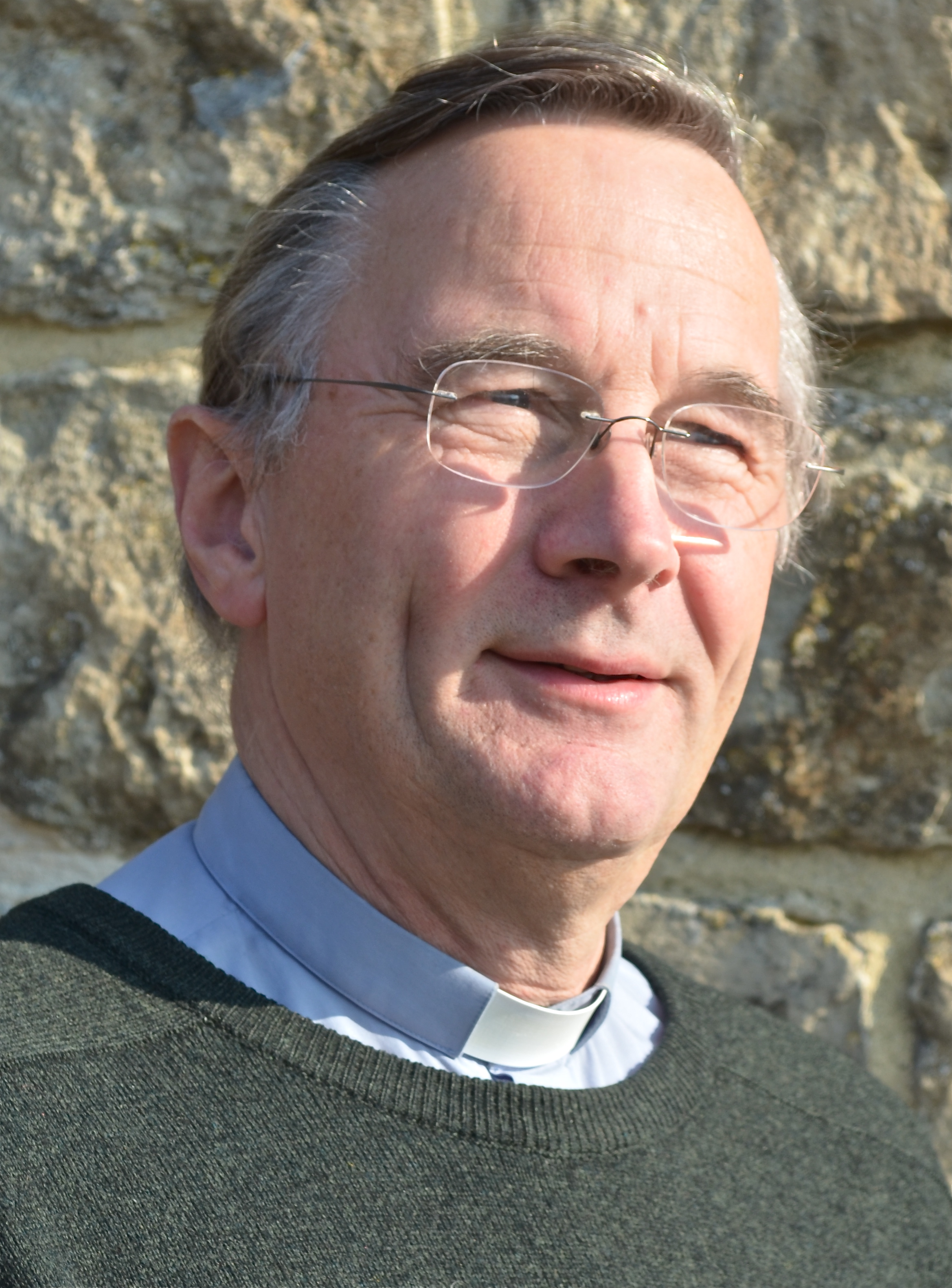 Robin and Jenny married in 1967 and have two children and four grandchildren. Robin was a curate at Rugby Parish Church while Jenny was a doctor in Coventry, then serving the Church in Papua New Guinea for a year. Returning to Edinburgh University in 1972, Robin was appointed Lecturer in Christian Ethics and Practical Theology. Robin also served as Priest-in-charge and Jenny as a GP successively in parishes in Edinburgh, the Scottish-English Borders and Kent. Robin became Professor of Applied Theology in 1988, first at Newcastle then at Kent Universities, and advisor on theology and medical ethics to three Archbishops of Canterbury. Retiring in 2013, they came to live more permanently in Gibraltar, with Robin still serving as Acting Dean 2017-2020 and Jenny as a part-time GP. Robin writes extensively on Christian ethics, edits the journal Theology, chairs the ethics committee of the GHA, and remains a Canon of both Canterbury and Gibraltar Cathedrals and a fanatical trumpet player. 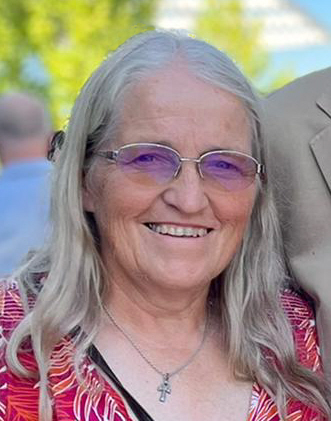 Sally grew up on the borders of Essex and London, and enjoyed her school years at Woodford County High School for girls. She then spent nine years at Nottingham, studying maths, maths and more maths - but also making the most of university social, sporting and Christian activities. She first met Ian while taking part in a Diocese of Chelmsford course for young people, 'Seventy for the Seventies' but they met again when Ian was training at St John's College, and they married a year before leaving Nottingham. During Ian's curacy, Sally worked in the planning department of London Transport. In Congo she engaged with women's groups, and served as the administrator for a network of church health centres. Back in Nottingham, she gained qualifications in teaching and counselling, and since then has held a variety of teaching posts at secondary school and university level. In London she continued to be involved in various sports, and was a leader of Brownies and Rainbows. She still teachs maths for the London School of Economics - but plans to retire soon.

Chris covers the Gibraltar Port Chaplaincy alternating with his colleague, Hugh, based at The Flying Angel on the North Mole and also assisting at the Cathedral. His former career was in photojournalism and newspapers for over 40 years. He was ordained in 2011 after studying for the priesthood at The Queen's Foundation in Birmingham, while running his own PR Photography business. He retired from parish ministry in 2021 after being Rector of a Benefice of three inner city parishes in Stoke-on-Trent where he was born. Chris is a long serving magistrate having served on the Bench for 33 years specialising in drug rehabilitation issues. He is supported by his wife, Heather, who takes an active part in his ministry. One of his hobbies is country walking and has authored several walking books. Another personal interest is working with our future generations in The RAF Air Cadets and is The Staffordshire Wing Chaplain. Prior to taking up this position in Gibraltar within the Diocese in Europe, Chris had Permission to Officiate on the island of La Palma in The Canaries. 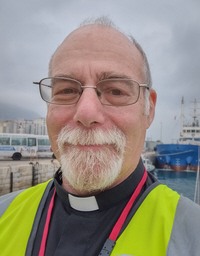 Hugh covers the Gibraltar Port Chaplaincy alternating with his colleague, Chris, based at The Flying Angel on the North Mole and also assisting at the Cathedral. His former career was in the Royal Air Force where he served as a Navigator on Nimrod Maritime Reconnaissance and then as a Flight Commander, training officers at the RAF College, Cranwell. He trained at Ridley Hall Theological College, Cambridge and was ordained in 1990. He has just retired from parish ministry as Team Rector of High Wycombe Benefice, Buckinghamshire based at the town centre church of All Saints. He studied at Sussex University and gained a BSc (Hons) in Materials Science, Molecular Studies. Having trained as a pilot in the RAF he continued this love of flying as a private pilot until 2021 when he changed his focus to boating and the maritime world. He now owns an old Seamaster 30 which is based on the River Hamble with the RAF Yacht Club. In his spare time he enjoys watercolour painting and making stained glass window panels. 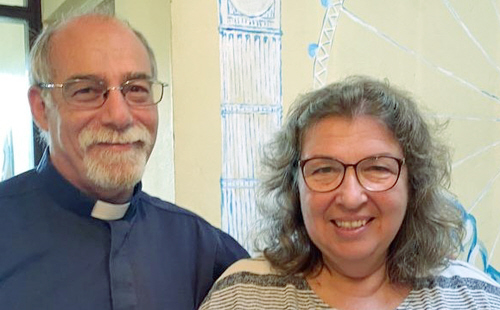 His wife Jenny is also ordained and will assist both at the Port and in the Cathedral.